Judges 13 – We all faith differently Maciejowski Bible, Leaf 14: Manoah and his wife give a sacrifice.

So Manoah took the young goat with the grain offering and offered it on the rock to the LORD, and He performed wonders while Manoah and his wife looked on. 20 For it came about when the flame went up from the altar toward heaven, that the angel of the LORD ascended in the flame of the altar. When Manoah and his wife saw this, they fell on their faces to the ground. 21 Now the angel of the LORD did not appear to Manoah or his wife again. Then Manoah knew that he was the angel of the LORD. 22 So Manoah said to his wife, “We will surely die, for we have seen God.” 23 But his wife said to him, “If the LORD had desired to kill us, He would not have accepted a burnt offering and a grain offering from our hands, nor would He have shown us all these things, nor would He have let us hear things like this at this time.” 24 Then the woman gave birth to a son and named him Samson; and the child grew up and the LORD blessed him. – Judges 13:19-24 (NASB)

I am a big fan of the Wesleyan Quadrilateral (WQ). In a nut shell, the WQ says that our faith is formed by a combination of four elements: scripture, tradition, reason, and experience (including experiences of the Holy Spirit). When I have introduced Christians to the concept of the WQ they tend to bristle at the thought of one of those elements being the foundation of their faith; but it is a different element for everyone. Some want to reject tradition, saying that instead we should abandon all tradition and go back to the first century church. Others want to reject experience, saying that our experience is fallible and should not be foundational to our faith. I, personally, have the least comfort with including reason as I have seen damaging theologies emerge from trying to “figure out” God. However, in the end, I believe all four elements are foundational to faith and I believe that our faith is formed be the interplay of all four elements. 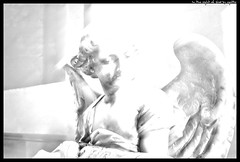 In the sight of God by Leonardo

The story of Manoah and his wife is a wonderful example of the interplay between the different elements of the WQ. Manoah speaks from scripture a tradition. He knows that Exodus 33:20 taught that those who see God would die. He also knew of the cultural traditions around him that spoke of the dangers of interacting with a deity. The gods of the Ancient Near-East tended to be violent and capricious; a dangerous combination for anyone mortal who may encounter a deity.

Meanwhile, Manoah’s wife, unnamed in the Bible but traditionally known as Hazelelponi (“shade coming upon me”), speaks from reason and experience. He husbands yells, “we will surely die”, and she examines the situation and makes the reasonable deduction that if God had wanted to kill them, God would have done it already. Hazelelponi also has the advantage of past experience; the Angel of the Lord had first appeared to Hazelelponi alone (v3 ff). Hazelelponi had previous experience with the voice of God and so was more easily able to put this new experience into context. 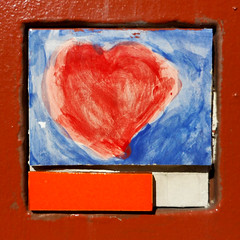 Taking some time to evaluate our beliefs in the light of the Wesleyan Quadrilateral can help us to have a more fully formed faith. It can help us to overcome obstacles to our faith, and assist us as we struggle with doubts and concerns. An attitude of “The Bible says it, I believe it, that settles it” can lead to a brittle faith. I believe that taking the time to understand faith within the context of reason, personal experiences, and the broader faith tradition is hard, but builds a more robust faith.

The Gileadites captured the fords of the Jordan opposite Ephraim. And it happened when any of the fugitives of Ephraim said, “Let me cross over,” the men of Gilead would say to him, “Are you an Ephraimite?” If he said, “No,” then they would say to him, “Say now, ‘Shibboleth.’” But he said, “Sibboleth,” for he could not pronounce it correctly. Then they seized him and slew him at the fords of the Jordan. Thus there fell at that time 42,000 of Ephraim. – Judges 12:5-6 (NASB) The Battle of Lawrence

When I was six years old my family moved within six blocks of Allen Field House on the campus of the University of Kansas. I never really had a chance of being anything but a rabid fan of the Kansas Jayhawks. You can tell a Kansas basketball fan from most other fans. There is a certain amount of pride, which borders on arrogance, which seeps into any discussion of college basketball. We know our history and take pride in the history of the Kansas basketball program. And we hate Missouri. It does not matter that Missouri has left the conference and we no longer play the program to the east, we still despise Missouri. For the historical roots of this rivalry take a moment to read about Quantrill’s raid and the burning of Lawrence.

In college sports we have devised a number of systems to make sure we can separate the strangers rooting for “our” team from the strangers rooting for “their” team. Kansas fans wear blue and red, Missouri fans wear yellow and black. Kansas fans rally around our Jayhawk mascot; Missouri fans rally around their tiger. Kansas fans chant “Rock Chalk” in the closing minutes each home victory; Missouri fans have little experience in celebrating the closing minutes of a home victory. We have developed systems to know who is on our side. Whenever I see a Kansas hat or shirt at the gas station or at work, I stop and make a positive comment to my fellow Jayhawk fan.

People are very good at spotting outsiders. There is something in our brains which cause us to make a nearly instantaneous decision that a person is “one of us” or “one of them”. This tendency is not limited to our college basketball affinities. In fact this tendency has a very dark side and has been a plague on humanity resulting in genocide, holocaust, enslavement, discrimination, and all sorts of evil. 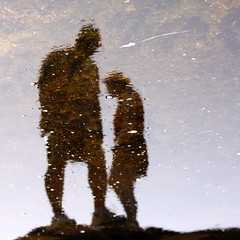 Our first instinct should not be to look for an outward sign to know if a new person is to be included or excluded. Rather, our first instinct should be to care for the stranger and meet their needs regardless of their affiliation. It does not matter if the stranger I meet is a part of a different group. The thing that matters is that we were both formed by our creator and placed on this earth under a divine mandate that we work with God to create a new and greater world. The strangers I meet are as fully known by God as my neighbors. My enemies are as loved by God as my family.

When I look at a Missouri fan, it is important that I first recognize that they are valued by God and they are worthy of my love, respect, and assistance. It does not matter if they say Shibboleth or Sibboleth; what matters is that I have an opportunity to reflect the light of Christ into their lives.