Summer canning season is in full swing. I picked the first batch of cucumbers and pickled them with some fresh dill and (nearly) fresh garlic. Those jars are sitting happily in the pantry next to the remainder of last year’s pickles (we really need to use those up). Next weekend I will probably shoot for a batch of sweet pickles.

I also had a chance to can my first batch of salsa for the season. This first batch was small because the tomatoes are just coming on. By next weekend I should have a decent crop to can some tomato sauce. The other problem with making the salsa was that neither the pepper crop nor the onion crop is in full bloom yet. Fortunately, I was able to scrounge up some bell peppers, some jalapenos, and enough white, red, and green onions to make a very passable batch of salsa (perhaps the best batch I have ever made). Next time I am going to cook down my tomatoes before adding my other veggies to try to give the salsa more texture. 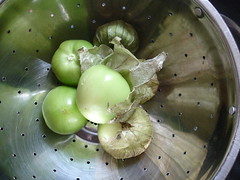 I picked my first batch of tomatillos this week and I am still not quite sure what to do with them. I have a small basket of them sitting in the kitchen and they may go out to the goats if I do not find a recipe shortly. I expect they would make an excellent mincemeat and once the hot peppers come on and color up, I should be able to mix those in to make a passable salsa verde. I’m sure there are other uses, I just need to spend some time researching. The tomatillo is a truly amazing plant. It has put up with some extreme weather and the septoria (which is ravaging the tomatoes) with hardly a whimper. The plants are tall and strong and bursting with fruit. Of course, the bounty will not be useful if I cannot find something to do with them.

The barley got planted last Saturday. We even had a good rain on Tuesday to help it want to germinate. Hopefully we will begin seeing shoots today or tomorrow. It’s a 90 day crop, so the barely harvest should be right about October 23. We need to get the winter wheat in right around October 15, so that might be cutting it a little close. If we run into trouble we can always cut the barely early and feed it to the goats.

The sweet corn is in peak form. I did five succession plantings of sweet corn, each about one week apart. So we should be able to pick fresh corn through almost the end of August. Hopefully we will be able to freeze some along the way to keep for this winter. There is nothing like grilling up some steaks and sweet corn on a sub-zero night in the middle of three foot drifts of snow.

On a final note, our Australian Shepherd Jessie got out of our backyard sometime during the day on Tuesday. She was gone when we got home from work. I spent about three hours driving around our part of town looking for her. There were some very helpful people on Facebook who told us where they had seen her earlier in the day. Unfortunately, my search was fruitless. I went home when it got too dark to keep looking and stewed on the couch for about half an hour.

Jen told me she was going to bed and I asked her to check the front yard on her way. About two minutes later Jessie came bounding down the stairs, covered in weeds, but very happy to see me. We hung out for a few hours then went to bed. I tried to put her outside, but she refused and demanded to sleep in the bedroom that night. I gave in, because I’m a softie.

It was two days later that it suddenly occurred to me that Jessie is unaltered. The gestation period for a dog is about 63 days, so we should find out about September 24 if she engaged in any extracurricular activities while she was out.

We spent a good chunk of this last week cleaning up the yard and garden. We have had beautiful, almost fall-like, weather which was perfect for mowing and trimming the lawns and paths. Some of the corners had grown some fairly tall weeds, so it was good to knock those down with the weed eater. I also took the time to tie up the first year grape vines to encourage their upward growth.

This has been a horrible year for Septoria Leaf Spot on our tomatoes. I usually try to run a garden totally free of all sprays and fungicides. That was not going to work this year if I wanted to have any sort of tomato crop. I have been spraying the tomatoes with two organic fungicides. The first is a microbial fungicide called Serenade. The second is a generic organic copper fungicide. The cool temperatures and low humidity of the last week seem to have also helped control the Septoria, so I hope to have a good, but not great, tomato crop.

I think the lesson for next year is to utilize some resistant hybrid varieties of tomatoes to help slow the spread of disease, rather than grow all heirloom tomatoes.

We finished harvesting the winter wheat crop. It was our first year with winter wheat, so the harvest involved a bit of trial and error. We tried pulling the wheat by hand, tried to cut the wheat with a corn knife, tried to use the weed eater (an epic failure), and tried hand clippers. Ultimately we used a hedge-trimmer to give the wheat field a haircut. We bundled several sheaves, but must of the wheat went into a giant tub to dry. We need to thresh the wheat over the next few weeks. That seems likely to be another adventure in experimentation.

After the wheat harvest, I took the flame weeder to the weeds left in the wheat field. I intend to till the field this weekend and plant our summer barley crop.

On a final note, our outdoor cats, Joey and Emily, died last fall and this spring respectively. They were both great cats and will be missed. In their absence the bird, squirrel, and rabbit populations have exploded. So we now have two new farmhands in training. Shadow and Ghost are going to be great hunters…someday.