Judges 16 – Care and Feeding Instructions For a Leader

One day Samson went to Gaza, where he saw a prostitute. He went in to spend the night with her. 2 The people of Gaza were told, “Samson is here!” So they surrounded the place and lay in wait for him all night at the city gate. They made no move during the night, saying, “At dawn we’ll kill him.” 3 But Samson lay there only until the middle of the night. Then he got up and took hold of the doors of the city gate, together with the two posts, and tore them loose, bar and all. He lifted them to his shoulders and carried them to the top of the hill that faces Hebron. – Judge 16:1-3

25 While they were in high spirits, they shouted, “Bring out Samson to entertain us.” So they called Samson out of the prison, and he performed for them. When they stood him among the pillars, 26 Samson said to the servant who held his hand, “Put me where I can feel the pillars that support the temple, so that I may lean against them.” 27 Now the temple was crowded with men and women; all the rulers of the Philistines were there, and on the roof were about three thousand men and women watching Samson perform. 28 Then Samson prayed to the Lord, “Sovereign Lord, remember me. Please, God, strengthen me just once more, and let me with one blow get revenge on the Philistines for my two eyes.” 29 Then Samson reached toward the two central pillars on which the temple stood. Bracing himself against them, his right hand on the one and his left hand on the other, 30 Samson said, “Let me die with the Philistines!” Then he pushed with all his might, and down came the temple on the rulers and all the people in it. Thus he killed many more when he died than while he lived. – Judges 16:25-30

As a kid in Sunday School they probably taught about Samson once a year. It was always a very sanitized version of the story, and I do not recall the teacher ever reading any of it out of the Bible. The lesson always revolved around Samson losing his powers when his hair was cut and then getting his powers back when he asked God. I look back in horror at the teacher who taught that Samson was analogous to Jesus in that he sacrificed himself, and the teacher that taught Samson got his powers back because the Philistines allowed time for his hair to grow back.

Samson was a horrible person who did very bad things, and that is how we should teach him. He was faithless, deceptive, arrogant, self-centered, and hot-headed (to name a few traits). 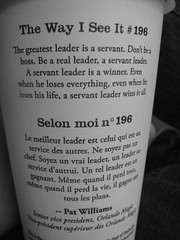 Many people are called into leadership positions. Frequently leaders use their power and authority to work in the best interest of those around them. However, there will always be leaders, like Samson, who use their position to visit prostitutes (literally or metaphorically), pick fights, and bring about destruction. These leaders may be moving the group in a desired direction; but their failures will ultimately cause harm to the group

As Christians we need to be careful in the selection and maintenance of our leaders.

Samson could have been a great leader. He had the abilities and gifts to be the greatest Judge the Israelites had ever known. But Samson squandered his gifts and abilities. He engaged in sinful behaviors which brought shame and destruction on Israel. Samson had no accountability and he knew it. Samson was a horrible leader and those in leadership today should learn from his example so we do not repeat it.